The Tourism industry of India is economically important and grows rapidly. The World Travel and Tourism Council calculated that tourism generated INR6.4 trillion or 6.6% of the nation's GDP in 2012. .

The Tourism industry of India is economically important and grows rapidly. The World Travel and Tourism Council calculated that tourism generated INR6.4 trillion or 6.6% of the nation's GDP in 2012. It supported 39.5 million jobs, 7.7% of its total employment. The sector is predicted to grow at an average annual rate of 7.9% from 2013 to 2023. This gives India the third rank among countries with the fastest growing tourism industries over the next decade. India has a large medical tourism sector which is expected to grow at an estimated rate of 30% annually to reach about ₹ 95 billion by 2015. 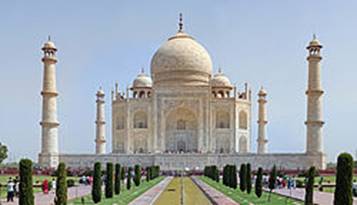 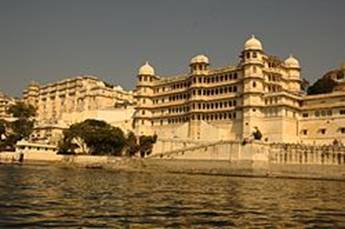 City Palace in Udaipur (also known as the Venice of the East).

According to provisional statistics 6.29 million foreign tourists arrived in India in 2011, an increase of 8.9% from 5.78 million in 2010. This ranks India as the 38th country in the world in terms of foreign tourist arrivals. Domestic tourist visits to all states and Union Territories numbered 1,036.35 million in 2012, an increase of 16.5% from 2011. The most represented countries are the United States (16%) and the United Kingdom (12.6%). In 2011 Maharashtra, Tamil Nadu and Delhi were the most popular states for foreign tourists. Domestic tourists visited the states Uttar Pradesh, Andhra Pradesh and Tamil Nadu most frequently. Chennai, Delhi, Mumbai and Agra have been the four most visited cities of India by foreign tourists during the year 2011. Worldwide, Chennai is ranked 41 by the number of foreign tourists, while Delhi is ranked at 50, Mumbai at 57 and Agra at 65 and Kolkata at 99.

The Travel and Tourism Competitiveness Report 2013 ranks India 65th out of 144 countries overall. The report ranks the price competitiveness of India's tourism sector 20th out of 144 countries. It mentions that India has quite good air transport (ranked 39th), particularly given the country’s stage of development, and reasonable ground transport infrastructure (ranked 42nd). Some other aspects of its tourism infrastructure remain somewhat underdeveloped however. The nation has very few hotel rooms per capita by international comparison and low ATM penetration. As per the UNWTO World Tourism Barometer, December 2013, India’s rank in the World Tourism Receipts during 2012 was 16th and rank in international tourist arrivals was 41. The rank of India was 7th among Asia and the Pacific Region in terms of tourism receipts during 2012.

The Ministry of Tourism designs national policies for the development and promotion of tourism. In the process, the Ministry consults and collaborates with other stakeholders in the sector including various Central Ministries/agencies, state governments, Union Territories and the representatives of the private sector. Concerted efforts are being made to promote new forms of tourism such as rural, cruise, medical and eco-tourism. The Ministry also maintains the Incredible India campaign.

India's rich history and its cultural and geographical diversity make its international tourism appeal large and diverse. It presents heritage and cultural tourism along with medical, business, educational and sports tourism.
Copyright © 2020 Indian Institute of Tourism
Website Maintained by www.institute.ind.in